My wife thought that my last book review was a bit random in a blog that had focused so far on our personal journey! But my plan is to include diversity and focus on a range of issues. In particular, I’m keen to spotlight books on a range of topics that I believe will be helpful to others. As I’ve spent nearly all my working life as a church pastor, I hope to review a number of books on topics such as ministry, leadership, teamwork, theology, church and the like. 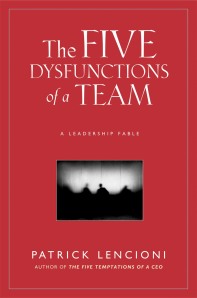 One of the most readable and helpful books I’ve found on the topic of teamwork is Patrick Lencioni’s The Five Dysfunctions of a Team: A leadership fable. I read the book cover to cover in one sitting at my favourite coffee shop. In fact, I remember wishing that all books were written like this one. Hook you in with a story, keep you wanting to know what happens next, develop the key points throughout the story, and then summarise the theory at the end. More importantly, I was hooked because I could see myself in the story. I could relate each of his points to our staff teamwork (or lack thereof). I knew that this was a book that I would keep buying and giving others to read. I got hold of a video of Lencioni teaching on the topic and we had a staff retreat to discuss our teamwork. I purchased the workbook and have used it in team contexts. I’ve given the book to rugby players and coaches, pastors, headmasters, CEOs and other team leaders. And I’ve recently ordered the Manga version!

The easiest way to summarise the content is by quoting from a brief article on Lencioni’s own website:

This occurs when team members are reluctant to be vulnerable with one another and are unwilling to admit their mistakes, weaknesses or needs for help. Without a certain comfort level among team members, a foundation of trust is impossible.

Teams that are lacking on trust are incapable of engaging in unfiltered, passionate debate about key issues, causing situations where team conflict can easily turn into veiled discussions and back channel comments. In a work setting where team members do not openly air their opinions, inferior decisions are the result.

Without conflict, it is difficult for team members to commit to decisions, creating an environment where ambiguity prevails. Lack of direction and commitment can make employees, particularly star employees, disgruntled

When teams don’t commit to a clear plan of action, even the most focused and driven individuals hesitate to call their peers on actions and behaviors that may seem counterproductive to the overall good of the team.

Team members naturally tend to put their own needs (ego, career development, recognition, etc.) ahead of the collective goals of the team when individuals aren’t held accountable. If a team has lost sight of the need for achievement, the business ultimately suffers.

As our staff team explored these ideas together we recognised each of these dysfunctions in varying degrees. We wouldn’t have said that we lacked trust in each other, but the fact that we avoided conflict showed we did. We’d describe ourselves as a team, but in some ways we were functioning as a bunch of individuals who got together now and again. It would often take forever for us to make changes or implement ideas, and yet we’d claim to be focused on getting things done.

This book has been around for a few years now and my guess is that many of you will have read it and found it helpful. But if you haven’t got into it, then let me give it a rap by sharing a few stories.

A senior pastor friend was sharing with me about how his staff team was fragmented, with one person in particular only interested in his own agenda. Everyone was uncomfortable with the dynamic that had set in, but no one knew how to address it. I sent my friend a DVD of Lencioni speaking on this topic and a copy of the book. The team watched the video and it was like having a consultant critique the team, and highlight the dysfunctional behaviour. The book then offered a framework for moving forward.

Another friend heads up an international software company. To describe the employees as a team is probably pushing it because the people don’t spend much physical time together. Some of them do, and a couple of them were creating chaos by refusing to communicate with each other. My friend was required to fly across to the other side of the world to resolve a spat between highly intelligent professional people who were refusing to talk with each other! So I gave him a copy of the book to read on the plane. He found it gave him a framework to tackle the issues and break the impasse.

Sometime back we were interviewing people for a job as an associate pastor. I stressed that team work was important to us, and asked each applicant to take a look at the Five Dysfunctions and discuss them with me. I was determined to find a team player. One of the applicants seemed very unimpressed with the model and I chose not to offer him the job. Interestingly, he got another job, but quickly decided that he didn’t really want to be a part of that team and went off on his own.

Our church is somewhat complicated. We have multiple congregations, various age-specific ministries, dozens of leaders, small groups, and a large staff team. Team work is vital. A challenge to us has always been engaging the staff and key leaders together in team work when the focus in on areas outside their direct responsibility. This book, and another by Lencioni called Silos, Politics, and Turf Wars, has been so helpful in drawing people together. It has reminded us that a win in the youth area is a win for the whole church. A struggle to ‘connect’ people into the church community has a direct bearing on every other area of church life. Everything is connected and you need a strong team to make it work. Lencioni kept pushing us to value each member of the team.

Teamwork is something that ought to be a hallmark of a church, or a ministry staff. And yet sadly, many of us know too well the pain of relationship breakdowns, competition for resources, and clashes of vision and priorities (our church included). I recommend getting a dose of Lencioni!

Of course, the best of this wisdom is but a pale reflection of the teaching of the Bible on teamwork. God has called people into relationship with each other, to be part of a body, a community, a team. As it says in 1 Corinthians 12:24-27:

24 … God has combined the members of the body and has given greater honour to the parts that lacked it, 25 so that there should be no division in the body, but that its parts should have equal concern for each other. 26 If one part suffers, every part suffers with it; if one part is honored, every part rejoices with it.
27 Now you are the body of Christ, and each one of you is a part of it.

2 thoughts on “The five dysfunctions of a team”