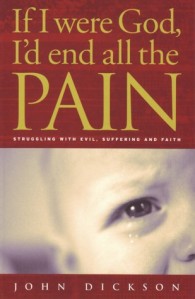 If I were God I’d end all the pain. That sounds pretty right. I’m not much of a fan of pain, especially my own! Currently, I’m sitting on my bed wearing ugg boots and a hoodie, bemoaning the cold weather, wondering if I’m well enough to venture out to watch the Brumbies play the Reds at Canberra Stadium tonight. Today’s temperature is supposed to range between 0 and 10 degrees. Subtract the wind chill and it will probably feel like minus a zillion at the ground. I must be sick or something, because until this year, I don’t think I’d missed a home game in a decade. Maybe I should ring up someone and see if I can sneak into a corporate box!

Yesterday it felt like sickness was getting the better of me. I ached all over and spent the afternoon and evening drifting in and out of sleep. I’ve probably just got another cold and a weakened immune system. But it’s not fun and it’s another reminder that things aren’t what they should be. For some dumb reason I checked the weather app on the phone at 10pm last night to discover it felt like -1.6 degrees in Canberra, while it was a balmy 25 degrees in Darwin. My heart sighed, I wished we were there, and once again wondered what on earth God was doing.

John Dickson’s little book, If I were God I’d end all the pain, is a helpful read for those who are looking for answers to the questions raised by suffering and pain. It’s not a detached philosophical book that fills the head and ignores the heart. John has experienced pain, first hand and from a young age, having lost his dad in plane crash when he was nine years old. He writes as one who understands the questions and who has explored many of the answers being offered.

Issues of faith and doubt loom large in the presence of suffering. Sometimes people attempt to use suffering as proof for the non-existence of God. It’s often expressed something like this:

John offers an alternative proposition that he explores in this book:

Assumption 1:  An all-powerful God exists.
Assumption 2:  All all-loving God exists.
Fact:  Suffering exists.
Conclusion:  God must have loving reasons (which he is able to achieve) for permitting suffering.  (p16)

This is not offered as a proof for God. Nor does it solve the problem of suffering. It still leaves deep and emotional difficulties for the one who believes in God. Such as, Why does God allow this suffering? and What has he done about it?

Before John gives a Christian explanation for the problem of suffering, he explores a number of other perspectives. He demonstrates how Islam understands suffering in a very different manner to Buddhism, and how Hinduism and Atheism are very different again. I won’t attempt to summarise these views because I don’t want to caricature them by reducing each to a few sentences. But it’s important to understand how different these world views are, against the popular claim that all religions are simply windows into the same truth. This suggestion shows serious ignorance and disrespect for each of these religions and world views.

The Bible’s perspective on suffering is that it’s okay to ask questions and raise doubts. In fact many of the biblical authors, especially the Psalm writers, do exactly that. Psalm 22 is offered as an important example:

1  My God, my God, why have you forsaken me?
Why are you so far from saving me,
so far from the words of my groaning?
2  O my God, I cry out by day, but you do not answer,
by night, and am not silent.

John writes in response to the words of this Psalm:

If I were a Buddhist, this sort of questioning would indicate my unenlightenment; if I were a Muslim, it would border on blasphemy; if I were an atheist, or course, it would be meaningless. Actually, I suspect some church folk of today would feel uncomfortable repeating the sentiments of this psalm. Sometimes we in the church feel we must declare “The Lord is my shepherd” even if the Shepherd seems to have gone walk-about. But faith isn’t like that, at least biblical faith isn’t like that. Faith is not denial of reality, nor does it involve repeating a mantra to dispel the doubts. The presence of Psalm 22, in the Bible, right before Psalm 23, reminds us that we have God’s permission to express our disappointment.  (p34-35)

The Bible gives an explanation for the cause of human suffering and it lies in our decision to reject our Creator. From that moment onwards (somewhere near the beginning of human history) everything has been out of whack. Things have grown worse and worse with every assertion of our independence from God. I’m preaching on Genesis 4-9 tomorrow and I’ve been struck again at how quickly everything deteriorated. John writes of Genesis 3:6, So began the long and torturous story of the human will: men and women, made in God’s image, defying their Maker for an imagined personal gain. (p42)

Of course, many have asked why God doesn’t simply step in, over-rule our selfish decisions, and stop the pain we cause. If he has the power to do this, then what’s stopping him? The answer lies in God’s respect for human dignity. He has made us as real beings with real choice. We’re not puppets like Truman, in the movie, The Truman Show. God doesn’t play ‘dolls house’ with the world. We are real independent beings who can choose either to relate to God, or to reject God. God allows us to choose, and to live with our choices, but he won’t allow evil and suffering to continue forever. He’s set a time when he will call all injustice to account. It’s a testimony to God’s patience that he hasn’t done this yet. God is giving people time to turn back to him.

This book also highlights the biblical perspective that God hasn’t given up on this world. He promises an eternal future for all who put their confidence in Jesus Christ. Contrary to the popular notion of heaven, where people are seen as disembodied souls separated from physical existence, the Bible speaks of a new physical creation. We can look forward to an end to pain and suffering and the restoration of our bodies. This is a place where we continue to enjoy real physical sensory experience. We can look forward to a future that holds real hope for those currently suffering in pain.

John finishes his book with a profound perspective on suffering that’s unique to Christianity. In contrast to Islam, which sees God as the ‘Unmoved-Mover’, the Bible portrays God as sharing in our suffering as the ‘Deeply-Moved-Mover’. Jesus, God-in-the-flesh, shares in this painful world, suffers deeply, and dies a torturous death by crucifixion. But the deeper significance in Jesus’ suffering is found in these words of Psalm 22, that Jesus makes his own:

My God, my God, why have you forsaken me?

Why would Jesus cry out such a thing? This is God’s Son, in whom God is well pleased, so what’s happening? Jesus does far more than experience my physical or emotional suffering and pain. He takes my guilt and shame, enduring the judgment of God against all my selfishness and sin, so that I can receive God’s mercy. Totally undeserved, but generously offered. Here is real hope for all who suffer… if we will put our trust in Jesus.