On Saturday afternoon we joined with hundreds of others in St Andrews Cathedral, to give thanks for John Chapman. His passing had affected people in a manner that I hadn’t seen since the death of Princess Diana in 1997. No doubt the death of Princess Diana impacted millions more than Chappo, but as I watched the flood of facebook tributes in the hours following his death, I was deeply moved. Chappo shaped the lives of thousands of people in ways that he would never have known. It was a joy to celebrate his life, to be reminded of his Saviour, to sing the songs he loved, to pray for the legacy of his life and ministry to continue, and to thank God that we were able to share in his life. 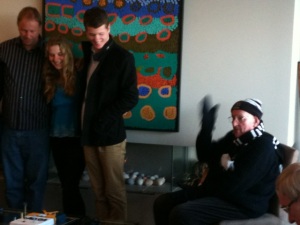 My relationship with this man grew over many years, from first hearing him speak as a uni student, to being trained by him as a preacher, to being mentored and encouraged by him as a pastor. He became a very good friend who was not afraid to tell me the honest truth. I sought his wisdom on many occasions, especially when faced with big decisions, and his advice was always controlled by a desire to honour Jesus Christ. He’d often give advice, even when it wasn’t asked for – but it was always good! Chappo loved nothing more that to explain the message of Jesus clearly, so that people would hear God’s wonderful message of life, forgiveness, relationship with God, and hope for eternity.

A Fresh Start by John Chapman is one of the clearest books explaining the guts of the Christian message that I’ve read. It’s written with charm and wit. If you’ve heard him speak a few times, you can almost hear the tone of voice in his writing. It’s full of stories and illustrations, but it doesn’t waffle or meander off track. I looked for a copy of this book on my shelf, following Chappo’s death, and I couldn’t find one. The reason is that as quickly as I buy them, I seem to give them away to others. So I’ve just ordered another 20 copies.

I remember some years back speaking at an annual Christian conference, and reviewing A Fresh Start to the gathering. I asked the question, ‘Who has been influenced to become a Christian through their reading of this book?’ A number of hands went up! One time I was with Chappo after he’d received a letter from someone in prison who’d been deeply affected by reading it. We talked about it, and Chappo humbly revealed to me that hardly a week went by when he didn’t receive a letter of thanks for this book.

I’m not going to summarise the contents of the book, other than to say it explains very clearly what a Christian is, and how you can become one. It focuses explicitly on Jesus Christ, revealing who he is, what he has done, and why he should be followed. Many of the questions that people ask about Christianity are well answered in this little book. It’s worth buying to read, and to pass onto others who are interested in finding out more.

On the 8th December last year, Chappo was very unwell in hospital in Sydney. As was I in Canberra. It was only days after I’d been diagnosed with cancer. My 13 year old, Marcus, had just finished reading A Fresh Start, and Fiona suggested that he write a note to Chappo thanking him. He did and I understand that Chappo was very moved by the letter. He mentioned it often, not only to us, but also to others. In fact, a friend approached me after the thanksgiving service and shared how he’d been with Chappo shortly after he received the letter. With tears in his eyes, he suggested that my friend would be encouraged as he read it too. And he was.

Marcus has agreed to me reproducing a slightly edited version of his personal letter to Chappo and we hope it’ll encourage others to read A Fresh Start.

My name is Marcus McDonald, son of David McDonald. I asked my dad for your book, a fresh start because one of my youth group leaders said it was a good book to read, and it was a great book to read. I became a Christian a few months ago at my youth group camp. I heard an amazing talk by Steve Prior and that’s when I decided to live for Christ. Since then I’ve been having a bit of trouble being a Christian at school. I’ve been too focused on what other people think of me and not what God thinks of me.

Your book has really led me back onto track with Jesus. I’m reading God’s word a lot more now. I’m reading through the New Testament and I’m up to Philippians. I finished your book the night I found out my father had cancer. It was a very hard night I felt very sad. I read the last chapter that night and it told me to just pray and let God decide what he wants to do. Your book has helped me with a lot of things and I want to thank you for writing this book and I hope to read more of your books.

When I found out my dad was in hospital I thought it would be nothing and that we would still go to Darwin and start a new church, but it doesn’t look like we will move after all. Which is disappointing because I was really looking forward to moving. I was looking forward to going to a Christian school and making more Christian friends, because at the moment I don’t have many Christian friends. I just have to trust God that he helps me live for him at school. I also wanted to go fishing a lot in Darwin.

I’ve heard you are in hospital and I hope that you will get better very soon. It’s sad to have a lot of sick people close to you. My grandad also has cancer in the throat and that’s been hard on him and my dad. I enjoy going to church and youth group and spending time with God and some friends. I went to one night of NTE and I loved the great Christian atmosphere and the singing was amazing fun, it was so loud.

So thank you so much.

4 thoughts on “A Fresh Start by Chappo”