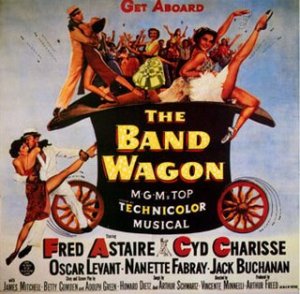 I’ve seen a lot of bandwagons over the years. I’ve ridden a few too! Maybe you have as well. I wonder, is it time to get off the bandwagon? I’m thinking especially as a pastor, one in Christian ministry leadership. Fads and fashions come and go. Leaders and their ideas or catch cries become the latest big thing. People are in or out depending on what band wagon they are or aren’t riding.

If you’re riding a bandwagon now, you mightn’t even realise. Perhaps, you’ve become so comfortable riding in the back that you haven’t given too much thought to what you’re doing or where you’re going. Maybe it’s time to get off. Maybe you need to take a bit more control, bear a little more personal responsibility. You could be better off walking or riding a bicycle.

What is a ‘bandwagon’? According to Wikipedia:

In layman’s term the bandwagon effect refers to people doing certain things because other people are doing them, regardless of their own beliefs, which they may ignore or override. The perceived “popularity” of an object or person may have an effect on how it is viewed on a whole. For instance, once a product becomes popular, more people tend to “get on the bandwagon” and buy it, too. The bandwagon effect has wide implications, but is commonly seen in politics, consumer and social behaviour.

And it’s commonly seen in pastors, preachers, churches, denominations, Christian networks, and more. I’ve seen it many times over the years. When I was at university, studying Social Work, all the Christians were into the writings of Larry Crabb. Great stuff too. But after a while it seemed that every issue, every sermon, every relationship was dissected in terms of our security and significance. When I was at theological college, everyone was talking about John Wimber and the signs and wonders movement. Sometime later it was the Toronto Blessing. For a while everyone was heading to the mission field, then we needed to see 10% of Australia in churches. One denomination was in favour, then another, and then everyone wanted to be independent. We had our teaching gurus, our Carsons, and Kellers, and Driscolls, and Pipers. Our convention speakers like Jensen and Cook, our authors like Lewis or Lucado, our apologists like Zacharias or Craig, our evangelists like Graham or Gumbel, our bloggers like Challies, our spiritual guides like the Gospel Coalition.

And it’s not a new thing. Some followed Luther, some Calvin, some Zwingli, some Cranmer. Some flocked to hear Wesley, others to hear Whitefield. Some read Edwards and others were devoted to Spurgeon. Going back even further, bandwagons abounded:

Brothers and sisters, I could not address you as people who live by the Spirit but as people who are still worldly—mere infants in Christ. 2 I gave you milk, not solid food, for you were not yet ready for it. Indeed, you are still not ready. 3 You are still worldly. For since there is jealousy and quarreling among you, are you not worldly? Are you not acting like mere humans? 4 For when one says, “I follow Paul,” and another, “I follow Apollos,” are you not mere human beings? 5 What, after all, is Apollos? And what is Paul? Only servants, through whom you came to believe—as the Lord has assigned to each his task. 6 I planted the seed, Apollos watered it, but God has been making it grow. 7 So neither the one who plants nor the one who waters is anything, but only God, who makes things grow.

I suggest it’s time to stop and think. Are we just riding a bandwagon? Is it time to get off? Is there another way to travel? A better way? I suggest there is. God calls us to think, to be wise, to reflect carefully on his word, and to follow Him. We’d do well to be like the Bereans, who are commended for their careful analysis of the Apostle Paul’s teaching by it examining against Scripture.

10 As soon as it was night, the believers sent Paul and Silas away to Berea. On arriving there, they went to the Jewish synagogue. 11 Now the Berean Jews were of more noble character than those in Thessalonica, for they received the message with great eagerness and examined the Scriptures every day to see if what Paul said was true. 12 As a result, many of them believed, as did also a number of prominent Greek women and many Greek men.  (Acts 17:10-12)

Bandwagons are not a safe or reliable way to travel. They have are all sorts of problems and risks associated with them. Let me highlight some of the dangers:

Bandwagons are lazy. You can sit on the back and enjoy the ride without having to think or do any work. Others have done all the work, thought about the destination, the path, the means of getting there.  If you were asked where you’re going, or why, or why you’re going that way, would you have an answer? Would it be a thoughtful, God-honouring answer? Have you taken the time to weigh things up, to think about things carefully, to know where you’re headed, how you should get there, and why?

Bandwagons are comfortable.  It’s not just that you can sit back while others do all the heavy lifting. You have your friends with you. This is the ride for your tribe! It’s comfortable to go with the flow, follow the trends, especially when others you trust are doing exactly the same thing. The more comfortable you become, the harder it is to get off, to think independently, to risk a major break with those around you.

Bandwagons can be blind. It’s more difficult to see where you’re going when you’re stuck in the back with everyone else. You’re blinded to what’s ahead, to significant threats  and dangers, and you might not notice when everyone makes a wrong turn. What if you’re all misguided? Maybe you need to look at the map occasionally and not simply trust those leading the wagon.

Bandwagons don’t last the distance. They come and they go. They charge ahead, but eventually they all peter out. Before too long, they get overtaken by the next one coming. Some from your wagon jump ship for the next one, and you feel the pressure to join them. Sometimes this works, but from time to time the wagon gets stuck in a deep rut, the wheels fall off, it gets completely lost, and then so are you!

Maybe it’s time to take responsibility. Get off and walk. Get out your bike and pedal. It’ll be hard work and you might be tempted to stop. There’ll likely be sweat, and blood, and dirt, and tears. You’ll get a few flats, the tyres will wear, the chain might come off, you might even get hurt. You’ll see the wagons come and go, and you’ll be tempted to get on. But keep on riding. You’ll see much more clearly where you’re going. The threats and dangers will be still be there, but it should be easier to avoid them.

Don’t just go with the flow. The head of my residential college at university, Stuart Barton-Babbage, used to say, “Even a dead dog can swim with the tide.” Prayerfully, engage your brain, seek wisdom from God, and weigh carefully what you see and hear. Be like the Bereans. My pastor years ago, Phillip Jensen, kept urging us “not to believe what he said, but to check it out for ourselves from the Bible.” Great advice. I’ve tried to follow this and call others to do same when they hear me speak or read what I’ve written.

We need to avoid the genetic fallacy when it comes to authors and preachers. Just because Don Carson, John Piper, Kevin de Young, Tim Keller, or Mark Driscoll have spoken or written on the matter, doesn’t make it right or true. As reliable as I believe these men to be, they are not infallible. They’re not the Pope and they’re not God. They will make mistakes. I do need to listen with discernment, read with care, and weigh up what they’re communicating in the light of the Bible.

I love the writing of Carson, but I’ve got questions over his understanding of worship. I’ve found de Young’s books to be such an encouragement, but I’d question his emphases on holiness. Piper is a riveting writer and speaker, but I’m still pondering some of his statements about how to view cancer. Keller is an extraordinary thinker and communicator, but I wonder if the emphasis on the city is overstated. Driscoll is a storm-trooping preacher and evangelist, but I struggle sometimes to see what is Bible and what is Driscoll. Each of these men are highly gifted and seeking to be profoundly biblical, but this does not excuse us from the need for careful thought and reflection. We’re not simply to jump on their bandwagons.

I picked the men above to illustrate my point, not because they’re bad, but because they’re so good and have such a broad influence. Most of what I hear and read is very persuasive. And I’m sort of caught up in much the same tribes as these guys. I might be wrong in the questions or critiques above. All the more important for me to search the Scriptures and prayerfully work out which way ahead. And by the way, if I start driving a bandwagon, please don’t get on. Much better to make your own way.

Get on ya bike.

9 thoughts on “Get off the bandwagon”