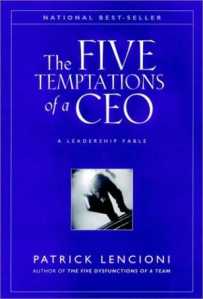 Being a self-confessed Patrick Lencioni fan, I figured it was time to re-read another of his books. I love reading them because he writes so well, and he begins most of his books with ‘A leadership fable’. He tells a story that illustrates the main points of the book. You get swept along in the story, and the points are obvious once he’s finished. The five temptations of a CEO is a complement to another of his books: The five dysfunctions of a team. This book isn’t just for CEOs. It’s valuable for leaders everywhere. The temptations that Lencioni identifies are common to leaders in many contexts. My leadership experience has been mainly in churches and Christian organisations, and I can testify that these temptations are very real.

Lencioni argues that the most important principle the CEO must embrace is a desire to produce results. Sadly, this is what gets many people into the position but their attention changes to preserving their status. This results in CEOs making decisions to protect their ego and standing. They tend to reward people who support them, rather than who produce the greatest results for the organisation. Contrast two answers to a question presented to a sporting coach: ‘What was the greatest day in your career?’

We all agree about the importance of holding people accountable, yet we rarely do it. I suspect this is an even bigger issue in many churches than it is in companies. It’s not easy. Nobody wants to be the bad guy. We all want to be liked – I know I do – and it’s a dangerous trait for a leader. We want to develop friendly relationships with our staff and that can make it harder to keep people accountable. Especially if someone we like is consistently not doing what is expected of them.

If the leader doesn’t hold people accountable, this will breed a culture of lack of accountability in the organisation. The irony is that some CEOs will fire people who do not perform, but they are too gutless to walk through processes of accountability with them beforehand, which might have avoided the need to fire them.

Holding people accountable requires that you give them clear targets to shoot for. They need to be very clear about expectations. They also need to understand the consequences if they don’t meet expectations. These are difficult conversations for many leaders, who would rather avoid them than feel awkward. The temptation to be liked can cripple an organisation.

Some CEOs will not make decisions until they are certain that they are correct. This is often impossible because outcomes are affected by so many unknown variables. This can paralyse the leader and the organisation. It often means that leaders are deliberately vague with others as they attempt to gain clarity for themselves. This wastes a lot of time and damages good will from others. The leader can end up frustrating their staff by their failure to make decisions or clarify directions.

What organisations need is clarity, and it is the leader’s job to provide it. Clarity about the goals of the organisation, what it’s aiming to achieve, the roles and responsibilities of the employees and other leaders, and the consequences for success and failure. This has to do with core things like vision, mission, values, and goals. It’s easy to give lip service to these terms, or to waste endless time getting the right words but failing to make any changes.

If the leader is spending his time trying to make sure that he makes every decision correctly, then he won’t offer the clarity the organisation needs. He’s more likely to fudge, just in case he’s wrong. He will remain deliberately vague about matters about which others desperately need clarity.

It’s okay to be wrong. Some would say it’s the CEO’s job to be wrong. If he discovers he’s wrong then he can fix it. If everything stays vague, if decisions don’t get made, then he will never know what needs fixing.

It’s normal to want peace and harmony, but it can be counterproductive to good decision making. If harmony or consensus is our goal then we will naturally restrict conflict, but Lencioni argues that healthy conflict helps us to create the best outcomes. He’s not talking about interpersonal conflict targeted at people, but healthy exchanges of different opinions on issues. The best decisions are made when all the knowledge and perspectives get aired. And people are more confident in decisions if they’ve had a chance to contribute. Meetings can be a good indicator of problems in this area.

Pleasant meetings – or even worse, boring, meetings ones – are indications that there is not a proper level of overt, constructive, ideological conflict taking place.  (p129)

Even leaders who resist the temptation to protect their status, to be popular with their staff, to make correct decisions, and to create harmony sometimes fail. Why? Because even though they are willing to cultivate productive conflict, their people may not be willing to do so. 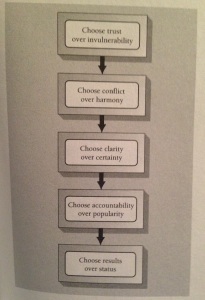 Many leaders are not willing to allow themselves to be vulnerable. They mistakenly believe that they will lose credibility if people feel too comfortable challenging their ideas. No matter how much a leader encourages healthy conflict, it’s only going to happen if people feel safe to engage. Otherwise people will passively line up with what they think the leader expects. It’s about trust. People who trust each other aren’t fearful about offering their opinions. But if you want people to trust you, then you need to trust them, and this means being vulnerable.

Five temptations of a senior pastor

Some time back out staff team spent a couple of days away and we watched a video of Patrick Lencioni teaching about the five dysfunctions of a team. I think we decided that we had all of them in varying degrees. If we’d been assessing the five temptations of a senior pastor, then I suspect the rest of the team would have identified me as giving into all of them in varying degrees too!

If you lead a church or a Christian organisation, then my guess is that this book will diagnose some of your temptations and give you areas to work on. I also suspect that your team will be pleased if you do.

Temptation 1
My temptation was not to measure anything. If you don’t measure then you can’t fail, but nor can you know how you are going. The results for a church will be measured in very different ways to a company or business. We will be focused on the impact on people’s lives, people growing into maturity as believers, people committing to serving one another, people not being tossed around by the latest ideas, people loving one another and reaching out to their neighbours.

Temptation 2
I’ve never been very good at holding others accountable for their work. A desire to avoid unpleasant conversations has led me to let some things slide. This might have been motivated by kindness, but in the end it’s not kind. It hurts the individual and frustrates the people they lead. Sometimes I would let things go until I became exasperated. The danger is that this would sometimes lead to overreacting. If I had my time again, I would establish clearer expectations for the members of my team and hold them more accountable. Regular clarification, update and review meetings would have helped people to perform better and meet expectations.

Temptation 3
Vagueness breeds frustration and can lead to a work environment becoming toxic. If people aren’t clear on their roles and responsibilities, then they will likely step on each other’s toes and annoy one another. Turf wars sometimes result. I’ve seen this in our teams when people do not have clear job descriptions. Ministry trainees working with different staff across different areas can find this especially difficult. Clarity covers over a multitude of sins – or should that be charity?! Maybe both.

Temptation 4
I think I’ve led far too many boring meetings. People have often wondered why they need to be there. I should have read Lencioni on meetings at the start of my ministry leadership. The only trouble was he hadn’t written the book yet! It’s important to encourage constructive conflict in our meetings, but this will only happen from a foundation of trust. People need to know that we’re on the same team and we can disagree together to arrive at the best outcomes for everyone. Leaders need to work hard to create such an environment, otherwise we just end up avoiding conflict so we don’t hurt each other’s feelings.

Temptation 5
Have I been willing to be vulnerable? I think so, but maybe there are blind spots that I haven’t seen. I can remember breaking down in tears during a few staff meetings. I can remember apologising to my team for what I’d done or failed to do. But I can also recall getting very defensive about people criticising my ideas and decisions.

We need to remember that we’re called to lead others by serving them, putting their needs before our own. The greatest example of one who did this is Jesus Christ. My desire is to follow his example, with his help, for the sake of his honour and glory, not my own.

1 Therefore, since through God’s mercy we have this ministry, we do not lose heart. 2 Rather, we have renounced secret and shameful ways; we do not use deception, nor do we distort the word of God. On the contrary, by setting forth the truth plainly we commend ourselves to everyone’s conscience in the sight of God.

5 For what we preach is not ourselves, but Jesus Christ as Lord, and ourselves as your servants for Jesus’ sake.  (2 Corinthians 4:1-2, 5)

One thought on “The five temptations of a CEO”