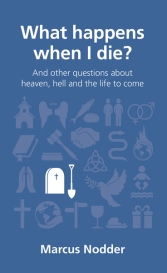 What happens when I die? And other questions about heaven, hell and the life to come by Marcus Nodder is another little book in the Questions Christians Ask series by the Good Book Company. Firstly, let me commend Nodder for being willing to share his life with the reader. This is not an academic book, written in ignorance of the pain of death. It’s a book that integrates the promises of God with the experience of death. He begins by reflecting on the death of his dad, and I immediately warmed to the author as one who would empathise with people’s experiences. I am convinced that this should be a vital component of any book that deals with sensitive and painful matters of life and suffering.

Nodder identifies the reality that death is not part of popular conversation and in the developed world we’ve become very adept at avoiding the issue altogether. Yet death intrudes on each of us, and the reality of death confronts us with some uncomfortable truths. I could identify with these words:

If you’ve been diagnosed with a terminal illness, you will need no convincing of this, but for the rest of us Sigmund Freud was onto something when he once wrote: “No-one really believes in his own death”. (p6)

This book takes us to Jesus who knows what lies beyond the grave and, not only that, provides the solution to the problem of death. Jesus broke the power that death holds over people, so that in turning to him and trusting him, we can look forward to life with God beyond death.

The basis for our hope for life beyond death lies in the evidence for the resurrection of Jesus from the dead. The empty tomb; the appearances to various people at various times; the eye-witness testimonies; the circumstantial (even embarrassing ) evidence for the resurrection recorded in the New Testament; the transformation of his followers, many of whom would give their lives rather than change their testimonies; all points to good reasons for trusting God on this matter.

If anyone at any time after the resurrection of Christ had been able to produce Jesus’ body —his corpse—Christianity would have sunk without a trace and that would have been the end of it. But there was no corpse because the body had been raised to life. The empty tomb is a powerful piece of evidence. You can go to the Red Square in Moscow and see Lenin’s embalmed body on public display. Followers of Bruce Lee go to visit his grace in Seattle’s Lake View Cemetery, where the remains of his super-fit body are interred. Followers of Mohammed go on a pilgrimage to the Mosque of the Prophet in Medina, where the the prophet is buried. But followers of Jesus Christ going to the Garden Tomb in Jerusalem find just an empty grace. (p39-40)

Many important practical and pastoral concerns are addressed in this book’s 94 pages. The author addresses such matters as What will happen to my body?; What will it be like to die?; How do we cope with bereavement?; and What will life be like in eternity? There are also brief answers to questions relating to prayers for the dead, ghosts, cremation versus burial, soul sleep, rewards in heaven, recognising loved ones, what is a soul or spirit, and even whether our pets will join us in the new creation! There is much to consider in this book, and each matter is addressed with appropriate sensitivity.

Nodder writes also of his grandmother dying of cancer. She was in her seventies and ready to go home to be with her Lord. However, she was bothered by well-meaning Christians who couldn’t accept the place of death. The reality is that one day we will all die. It may be tragic and sudden, or it may be slow and peaceful. There will be a day when our organs will cease to function, when there is no more healing to be found in this life. This is God’s will for each of us—for since the fall we are no longer equipped to live forever in this life, and God has something far greater in store for all who trust him. Sadly, there are some Christians doing much damage by their unwillingness to accept this.

Some people by their obsession with healing seem to me to rob Christian souls of their privilege and opportunity to glorify God in the way they die. Instead of a triumphant acceptance of death, as simply one more step in the purposes of God for them, we find instead an hysterical search for healing as if it were quite impossible that it should be God’s will for a Christian to die. Instead of courageous testimony, we find an attitude to death that resembles in many ways the conspiracy of silence and the double-think that we find in the world. It ought not to be so. (p59)

I notice ads on the TV for life insurance, funeral insurance, and leaving a will, a lot more often since I’ve been diagnosed with a terminal cancer. They’ve probably all ways been on TV and I haven’t noticed. Perhaps I just watch more TV now! The ads are correct in highlighting the need to make decisions about these matters while we can; but they almost suggest that once these choices are made, we can go back to just getting on with life. It’s not sufficient to consider our death—we need to make plans and preparations beyond death, and this means we need to go to the Bible.