It’s a small world, sometimes. Last weekend Fiona and I were camped in the shearers quarters at Lake Menindee, together with the members of Saltbush Church from Broken Hill. We hadn’t been there before and it’s quite a while since we were anywhere so remote. Over breakfast I met John Wenham, and I jokingly said that I had a few books written by him at home. Turns out that I had read books by his grandfather of the same name, also a few by his dad, and a couple by one of his uncles. I’ve since read a book by another of his uncles, Michael Wenham, called My Donkey Body: Living with a body that no longer obeys you. Wow, so many books in one family! 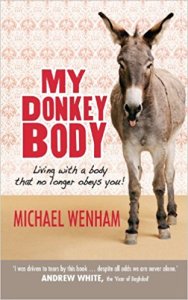 My Donkey Body recounts Michael Wenham’s journey with a rare form of Motor Neurone Disease (MND). If you’re unfamiliar with this disease, think Stephen Hawking. The motor neurones that transmit instructions from the brain to the muscles deteriorate and cannot replace themselves. The brain keeps working but it becomes unable to get messages to the muscles to do their work. The person becomes more and more debilitated and eventually the muscles that keep you alive stop working. MND is a terminal illness and there is currently no known cure.

Michael Wenham is a Christian, who tells his story of discovering and living with this disease from the perspective of faith. My Donkey Body is a sad, gripping, and often humorous account of one man, together with his wife and family, coming to grips with weakness, disability, frustration, pain, and ultimately mortality. As a preacher, whose voice was his tool of trade, he recounts what it’s like to lose control over your vocal muscles. He shares about the humiliation of being picked up out of the gutter by strangers and relying on his wife to wipe his backside. There’s nothing romantic about MND.

I checked with Google and discovered that Wenham continues to blog, write articles, and he has done some very moving video interviews. Wenham has now been living with this disease for many years. While his physical abilities have declined, his mind has remained sharp. He engages with real issues of relationships, health, religion, dependence, living and dying. Wenham has engaged with Stephen Hawking and provided informed and sympathetic rebuttals to Hawking’s dismissive critiques of any afterlife. He has written against legalising assisted suicide for the terminally ill like himself.  He opposes the creation of human stem cells for the purpose of experimentation, even if it should provide the cure for MND. His arguments aren’t a bigoted bias toward regressive religion over against progressive science. Rather, they arise from one who knows suffering and mortality, but who deeply respects that all persons are made in God’s image. He demonstrates powerfully that people are not valuable according to their utility and value to society (however that might be measured), but because God has made them human. Every person matters.

Wenham argues for the importance of knowing God and having faith in God’s power and goodness. He’s prepared to ask the hard questions and admits to not having all the answers. Being a Christian doesn’t take away the pain or the suffering. He argues with CS Lewis:

I am grateful that Michael Wenham took the time and made the effort to share his thoughts. Much of this book resonates with my experience of receiving a terminal diagnosis, coping with physical and mental pain, losing things that have shaped my identity, and asking questions of faith and doubt. Yet my circumstances have taken a turn for the better. Many of my disabilities have been replaced by renewed abilities. And that brings it’s own dangers and threats—especially the risk of forgetting how much I need God.

There is something about weakness that drives us back to our Father in heaven. I need to be reminded that this life is a gift from God. Every day is a day for rejoicing. Nothing should be taken for granted. The less I remember my dependence on God, the bigger an ass I become. 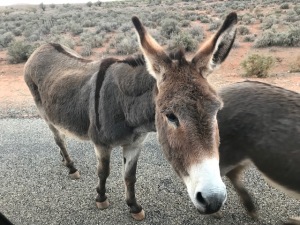 10 thoughts on “My Donkey Body”