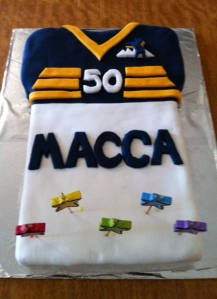 Had my birthday on Sunday. 50 not out! To be honest, late last year I seriously doubted I’d see this day. As the news of cancer hit us like a tsunami… as we sat drawing up my will… as I talked seriously with some of my kids about life without their dad… as I collapsed in the x-ray room, unable to breathe or support my own weight… as I struggled to think about all the things Fiona would need to know… as my whole life seemingly passed before my eyes, with people travelling from everywhere to see me… I didn’t hold a lot of hope of seeing my 50th birthday.

But God has been very kind, and I not only reached my birthday, but I thoroughly enjoyed it! It was cool to be bombarded by facebook messages, emails, cards and greetings from friends all over the world. It was a great joy to share an afternoon in our backyard with a number of our friends. Fiona was awesome, she had gone to so much trouble to give me a special day – and it was! Our church sang Happy Birthday to me and gave me an incredible cake! It was a fun day. 🙂

In fact, this has been a special weekend in other ways as well. Saturday night was the annual Brumbies Presentation Dinner – a black tie affair! I couldn’t remember ever wearing a dinner suit before and I thank the two men who offered me all the bits and pieces I needed. It felt kind of cool to be all dressed up like James Bond for a night, with a pretty girl on my arm! The dinner is a night to celebrate the season and give awards to the best players. Over the years some of the best players I’ve ever seen have taken out the awards. Notably George Smith winning Players’ Player on 9 separate occasions!

The shock of the evening was the announcement that I’d won an award – Best Left Right Out of the Team! No, I was given the Garry Quinlivan Service Award in recognition of service to the Brumbies. It’s an absolute honour to receive this award named after Quinzo. He’s a living legend at the Brumbies, having given his everything in serving the players since the club began. It’s been my privilege to serve as their chaplain for ten seasons. Most of the time my efforts are well hidden, behind the scenes. I don’t do it for money or recognition, but it was lovely to receive this show of appreciation.

Some weeks back I asked Marcus, our lead pastor, if I could preach on this Sunday. “But it’s your birthday”, he said. “What would you want to preach on your birthday for?! You’d better check with Fiona, and your oncologist!” I count it a special gift from God to have been able to preach from the Bible at church on my birthday. I debated whether I should, because I didn’t want to do it for my sake, just because I like preaching. But deep down I wanted to be able to share God’s word with those I love. It’s the greatest gift I had to offer them.

I love teaching God’s word to others and I love sharing in people’s lives, so it was a delight to look at this part of the Bible. 1 Thessalonians 2:8 especially stands out:

Because we loved you so much, we were delighted to share with you not only the gospel of God but our lives as well.

These words are an encouragement to me to make a priority of both truth and relationships. It’s hopeless to be a preacher who is doctrinaire and disinterested in people. It’s dangerous to be a people-pleaser who is cavalier with the truth. Genuine knowledge of God shows itself in real love for people. Real love for people will be shaped and guided by the truth. Real love leads to humbly making the truth known to others.

God’s love, revealed in the gift of Jesus Christ, is the truth that keeps me going. It’s a message of hope and life and a future beyond death itself. I know it will seem to some as wishful thinking or religious superstition. But I ask you to give the message about Jesus’ life and death and resurrection your serious consideration. If it’s true, then you have nothing to lose and absolutely everything to gain.

I don’t know how many more birthdays I’m likely to see. I do pray there’ll be many more to come, but the message of Jesus gives me hope beyond birthdays. These words by John Newton express what I believe and where my hope lies:

Amazing Grace, how sweet the sound,
That saved a wretch like me.
I once was lost but now am found,
Was blind, but now I see.

T’was Grace that taught my heart to fear.
And Grace, my fears relieved.
How precious did that Grace appear
The hour I first believed.

Through many dangers, toils and snares
I have already come;
‘Tis Grace that brought me safe thus far
and Grace will lead me home.

The Lord has promised good to me.
His word my hope secures.
He will my shield and portion be,
As long as life endures.

Yea, when this flesh and heart shall fail,
And mortal life shall cease,
I shall possess within the veil,
A life of joy and peace.

When we’ve been here ten thousand years
Bright shining as the sun.
We’ve no less days to sing God’s praise
Than when we’ve first begun.