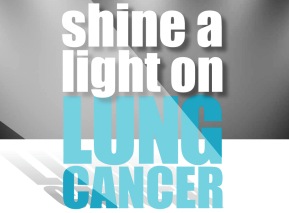 We’ve all heard of Movember. During the month of November moustaches sprout on men’s faces everywhere. The aim of this campaign is to raise funds and awareness for men’s health, specifically prostate cancer and male mental health. The mo has played an important role in lifting the lid on some huge issues that have been kept private for too long.

I wasn’t aware until very recently that November is also Lung Cancer Awareness Month. It comes hot on the heels of the global pink month, promoting awareness of breast cancer. Whereas pink ribbons are ubiquitous, I’ve never noticed the pearl or white ribbons for lung cancer. Nor did I realise that there are purple, blue, jade, periwinkle, orange, violet, gold, green, and a whole bunch of other coloured ribbons promoting awareness of many different cancers. Without taking away from the importance of increasing awareness for all cancers, there are some particular issues facing the lung cancer community.

Some month’s back I don’t think I knew anyone with lung cancer. Now I’m meeting more and more every week: a dad, like me, with a wife and four kids; a young woman in her 30s; an older guy in his 70s; a large spectrum of age and sex and life circumstances. I’m learning that lung cancer doesn’t discriminate.

Some of my biggest surprises have been very personal. If you’d asked me last year to name what causes lung cancer, I’d have said quite simply ‘smoking’. We hear this message daily. The campaign against tobacco smoking is now huge. Of course, smoking often does cause cancer, but my mistake was that I thought it was the only cause of lung cancer. But now I had lung cancer… and I’d never smoked (other than a small number of experimental cigarettes in my teens). Nor was I a passive smoker, as I hadn’t spent much time in the company of smokers.

I learned that there are different types of lung cancers, and they’re not all caused by smoking. I had what could be described as a ‘non-smokers lung cancer’. It’s usually difficult, if not impossible, to determine what causes this cancer. We’ve wondered about a range of personal and environmental factors, but we really have no idea. In my case there are genetic factors involved, but much more research is needed to understand this cancer, and more still to keep improving treatments and ultimately find a cure.

As I’ve learned more about lung cancer and met some of the people who are battling it, I realise that many are battling another issue as well… stigma.

“How long did you smoke?”
“I didn’t know you were a closet smoker.”
“Too bad he didn’t quit smoking sooner.”

Unlike the unconditional and unquestioning support given to those with other cancers, many with lung cancer often feel singled out, like somehow they deserve to have cancer. There’s a feeling among the general public that lung cancer is a self-inflicted disease. Whereas other cancers are simply tough luck, lung cancer is viewed as ‘your own fault’.

Let’s consider this and give it some perspective. Most of those who have ‘smoking related’ lung cancer today, took up smoking years ago when it was cool to smoke, when society promoted and advertised the benefits of smoking, when serious health links weren’t well understood. We now criticise them for not knowing better or we blame them for not overcoming their addiction. This seems pretty self-righteous, bigoted and cruel to me. Add to this, the fact that an increasing percentage of people with lung cancer have never smoked or gave up decades ago and you can see the problem. A recent series of ads in the US has highlighted the wrongness and naivety of these attitudes…

The reality is all cancer is awful, nobody wants it, and nobody asks for it. Most people will be impacted seriously by cancer at some stage of their life. No one is out of reach. It’s tough to say, but it could hit you and it could hit those close to you. It’s worth asking, “How would I want to be treated if I have cancer?” and “Would it make any difference if it was lung cancer?” I think I’ve got a pretty good idea of your answers. Lung cancer doesn’t discriminate, and neither should we.

November is lung cancer awareness month. I hope you can take the opportunity to become more aware. Look for opportunities to learn. Find out what you can. Maybe google a few sites. You could take a look at a recent post, Help Me Live, which gets inside the experience of those with cancer. I’m planning to attend a Shine a Light on Lung Cancer vigil to promote awareness. Maybe there’s one near you that you could get along to. Lung cancer needs to move beyond the stereotypes and stigma. People with lung cancer need your support. Our society, our governments, our charities, our big business, our scientists, our researchers, our medical profession, our drug companies need to invest in tackling this killer. This takes commitment, time, and money.

Please repost this, pass in on, and share this with others!