I’ve got a book on my shelf outlining all the different phobias that plague people. It’s quite amusing really – unless you have a particular phobia! It includes all the common ones such as the fear of heights, the fear of confined spaces, and the fear of spiders and snakes. But it also contains some rather bizarre phobias such as the fear of being the thirteenth person at a table. I think that Christians have their own distinct phobias which could be added to the list. One example might be the fear of reading the Old Testament. We could call it some thing like fromgentomalaphobia, which translated means ‘from Genesis to Malachi phobia’. Do you suffer from this debilitating problem? Is the Old Testament a foreign, confusing or closed book for you? If so, then allow me to introduce a cure. 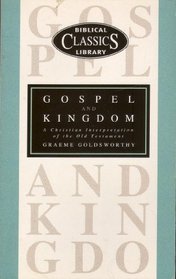 Graeme Goldsworthy’s book, Gospel and Kingdom, is written with the express purpose of helping Christians to read, understand and apply their Old Testaments. It does this in a number of ways. Firstly, it shows the coherence of the Old Testament. It hangs together, it reveals an historical narrative, it has a beginning and an end. Secondly, it shows how different types of literature interrelate to comprise the Old Testament. And thirdly, it reveals and develops an important theme, preparing the reader for the New Testament. The Old Testament isn’t locked into an ancient time zone, with absolutely no relevance for today. It points forward and finds it’s fulfilment in the Jesus Christ.

For no matter how many promises God has made, they are “Yes” in Christ. And so through him the “Amen” is spoken by us to the glory of God.  (2 Corinthians 1:20)

But how exactly are we to read these ancient documents? What do we make of all the laws and rituals? How do we move from historical stories to modern applications? Is it simply a matter of drawing analogies or looking for metaphors of the Christian life? Are there guidelines or restraints on what we, as modern readers, are to make of the Old Testament?

Goldsworthy illustrates the problem of how we handle the Old Testament, by describing a children’s talk that uses the story of David and Goliath:

There had been lots of excitement in the play-acting of that great victory by God’s chosen leader… The fellow dressed up as Goliath had progressively revealed a list of childhood sins by peeling strips off his breastplate one by one, as the speaker explained the kind of  ‘Goliaths’ we all have to meet. Then a strapping young David had appeared on cue, and produced his arsenal – a sling labelled ‘faith’ and five stones listed as ‘obedience’, ‘service’, ‘Bible reading’, ‘prayer’ and ‘fellowship’.  The speaker had omitted to say which stone actually killed Goliath…  (p10)

We might laugh at this account, but I think this way of using the Old Testament is all too common. Shortly after reading this book in the mid 1980s, I heard a well-known preacher giving much the same message about David and Goliath. I’ve used Bible reading notes and booklets that seem to treat the Old Testament purely as a springboard for ideas or as a collection of parables or fables. Surely this can’t be the right way to read the Old Testament, can it? There’s got to be some guiding principles or else we can end up making it say whatever we want it to say.

Goldsworthy’s book introduces us to the most important guideline for reading the Old Testament. As Christians we will always be looking at the Old Testament from the standpoint of the New Testament – from the framework of the gospel which is the goal of the Old Testament. This is not an arbitrary guideline, but rather one we find exhibited by Jesus himself. Everything points toward and finds its fulfilment in the person and work of Christ.

And beginning with Moses and all the Prophets, he explained to them what was said in all the Scriptures concerning himself.  (Luke 24:27)

Goldsworthy uses the theme of the kingdom of God and the gospel as a grid by which to understand the development of the Old Testament. Thus, in the beginning we see God’s people (Adam and Eve) in God’s place (the garden) under God’s rule (God’s word). This theme can be traced throughout Israel’s history to its fulfilment in Jesus Christ. The Old Testament is understood as progressive revelation which leads us gradually to the full light of truth. This means the Old Testament is able to make us wise for salvation and to equip us to live Christian lives.

14 But as for you, continue in what you have learned and have become convinced of, because you know those from whom you learned it, 15 and how from infancy you have known the Holy Scriptures, which are able to make you wise for salvation through faith in Christ Jesus. 16 All Scripture is God-breathed and is useful for teaching, rebuking, correcting and training in righteousness, 17 so that the servant of God may be thoroughly equipped for every good work.  (2 Timothy 3:14-17) 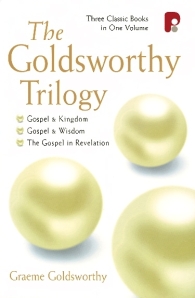 I hope this short introduction has whet your appetite to wipe away the cobwebs and get into the Old Testament. When I first read Gospel and Kingdom it blew my mind. I’d read this part of the Bible before, but I didn’t really know what to do with it. That was almost 30 years ago. Goldsworthy’s book is still going strong, and has been published recently as a ‘Biblical Classic’. If you’re looking to get a copy of this book it can be difficult to find on it’s own these days. Instead, you can easily purchase it as part of The Goldsworthy Trilogy (and usually at a good price). The trilogy also contains two more of Goldsworthy’s excellent books, Gospel & Wisdom and The Gospel in Revelation.

It’s been my experience that Gospel and Kingdom helps overcome fromgentomalaphobia! Give it a read.