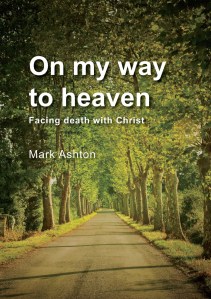 Have you ever been given a gift by someone you’ve only just met? Last year my friend and colleague in Christian ministry was given two copies of the same book by a person they didn’t know. It was a short book written by the guy’s recently deceased minister, Mark Ashton. The book was called On my way to heaven. My friend had no idea why he was being given one copy of this book, let alone two! That is, until he returned to Australia and a few days later discovered that I had been diagnosed with a ‘terminal’ cancer. He realised, in God’s providence, that he’d been given a copy for me too!

This is another little book that punches well above its weight. It’s only 24 pages long, and printed in large type. (Makes it easier for me to keep reading and reviewing books!) I would assume that the title of this of this book will be very confronting to many. Either because it presents us again with our mortality. Or, perhaps, because it seems so presumptuous – how can anyone be sure they are headed for heaven? Isn’t this is an arrogant claim?

On this latter point, the answer is very clear in the Bible. A Christian is not a religious person, trusting in their moral performance to be offered a place in heaven. Rather a Christian is one who has received forgiveness from God for having ignored him or pushed him away. This forgiveness is a completely free gift from God, that can be received by all who put their trust in Jesus to lead them and rescue them from God’s judgment. The New Testament makes it clear that the death and resurrection of Jesus, events that took place in human history, have a direct bearing on you and me today. Jesus died to pay the cost for our rejection of God, and God raised him to life to destroy the power that death has over us. A Christian is not a ‘self-righteous’ person, but one who has been given a pardon by God.

On the former point, Mark Ashton wants to do exactly this – get us to think seriously about where we’re headed. The one thing we can be assured of in this life is that one day it will come to an end. It may be later, or it may be sooner than we’d like. But it will happen. It often surprises me how much time and energy people (including me) spend distracting themselves with the unimportant and the trivial. We get all focused on ourselves, our hobbies, our bits and pieces, our aspirations for wealth or achievement or recognition, and we give little or no time to considering the profound question of what happens when we die. Please, if you you are avoiding this question – don’t! It’s too important!

Ashton was diagnosed with an incurable cancer of the gall bladder in 2008, informed that he had only months to live, and he passed away in 2010 at the age of 62. His book offers us a window into his thinking, his struggles and his faith over the final months of his life. I was deeply moved as I read how he faced death as a Christian believer.

The core of this book is Ashton’s conviction that resurrection awaits him. This is the basis of his hope and it is grounded in the evidence of the early witnesses to the resurrection of Jesus. He does not dread death, or seek to extend his life at all costs, but rather sees resurrection as a prospect to be welcomed.

He doesn’t gloss over the hardship of sickness. Throughout his life he, like most of us, expected to recover from whatever sickness or injury he experienced. He’d rest up until he got better. But he came to know that he wasn’t going to get better, the cancer wasn’t going to go away, and that he was dying day by day. This is something I’ve also been coming to grips with. Physical pleasures such as eating, exercising, or resting, no longer offered the enjoyment they once did. He came to appreciate that they were God’s gift for a time, but not for all time. His love, affection, and appreciation for his wife and family was deepened over this time, but be also came to grasp that relationship with God gave meaning to them all.

Ashton is honest about his failures and foibles in life. He gently points out that funeral eulogies rarely present an honest picture of the person’s life. They end up magnifying the good points and excluding the bad (and maybe this is appropriate). But he leaves us in no doubt that he wants to be remembered not as a flawless saint, but as a forgiven sinner.   God enabled Mark Ashton to be focused on others as he faced his final days. This is his prayer:

It is my prayer for my family and friends, that my death will be for them all a great strengthening and clarifying of their relationship with Jesus. Amen. (p24)