This has been a big weekend. I’ve spent much of the day talking with people about our wonderful friend, Chappo, who went home to be with the Lord last night. We’ve just returned from the ‘Shine a Light on Lung Cancer’ vigil at Parliament House, where I got to speak about my experiences with the disease. Today, November 17, is International Lung Cancer Awareness Day.  And I’ve just discovered that today is also World Prematurity Day.

Our family has a very special affinity with premature babies. We’ve recently been praying for a little boy called Noah who was born extremely premature. It’s a tough journey for baby and parents and it’s been a joy to see this little boy slowly growing stronger and eventually heading home from hospital. The reason for our special interest in premature babies goes back to the birth of our third child, 16 years ago. Our daughter was unexpectedly and dramatically born 14 weeks premature. Here’s a letter that we shared with people praying for our daughter in December of 1996…

As 1996 began, we knew this year would be a big one, but we weren’t prepared for just how big. Without a doubt the biggest thing in our lives this year – or should that be the smallest – has been the arrival of Grace Alyssa. Here’s a brief history…

September 30 – we were enjoying a much needed rest on the beach at Coffs Harbour. October 1 began with Fiona going into labour. We hurried to Coffs Hospital, not sure what would happen – but certainly not expecting a baby yet. The doctor told us our baby would be born that day and if he or she lived, we could expect a massive catalogue of complications. In a state of shock I contacted a few friends and family and asked them to pray. A newborn emergency transfer team (NETS) flew up from Sydney and arrived about 1pm. At 2.55pm Grace was born by caesarean section, weighing only 900 grams. The NETS team took charge and attached Grace to every piece of machinery you could imagine. After she was stabilised Fiona and Grace flew to Canberra Hospital and Grace was admitted to the neo-natal intensive care unit (NICU). My boys and I stayed overnight with friends in Coffs before driving to Canberra the next day. Day one in a nutshell. 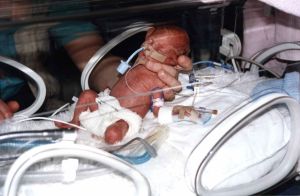 Grace is now 79 days old and has spent her whole life in intensive care. We have visited her every day and grown very attached to her. But the past 11 weeks have been a roller coaster we could never have imagined. She’s had major dramas with her heart, her lungs, and her gut. She has suffered major infections causing serious setbacks. She’s had three air ambulance rides. We’ve spent time at the Children’s Hospital in Westmead. We’ve done a few thousand extra kilometres in our car. There’ve been many times when we thought she was going to die. We’ve experienced the excitement of taking a step forward only to suffer the heartache of slipping three steps backwards. We’ve seen other babies die in the ward around us and wondered if Grace would be next. We’ve watched the joy of parents taking their little ones home and prayed for the day when that’d be us. About five hours every day is taken up with Fiona expressing milk and spending time with Grace. It’s been a long haul so far.

Grace has come a long way. Sometimes we’ve felt silly reporting on Grace because a few hours later the information has been wrong. It has been very much a day to day, hour by hour, journey so far. But the big picture is getting better. Grace is now approaching her expected birth date, 7th January. She’s grown to 2 kilos, is breathing well and drinking breast milk via a tube into the stomach. She no longer seems quite so fragile and vulnerable. We rejoice at the progress she’s made. We hope she’ll come through with no lasting problems. But our journey will in some ways get harder still. Fiona will have to step up the travel as they attempt to establish breast feeding, and then eventually we’ll have to cope with bringing her home and all the changes there. Please keep praying for us, sometimes it all seems a bit much.

This was more than 16 years ago. Then she was tiny and vulnerable – now she’s strong and healthy. Sadly, for many parents, the outcomes of their stories aren’t as happy as ours. The Miracle Baby Foundation reports that in Australia each year approximately 25,000 babies are born premature and up to 1000 babies lose their fight for life. We thank God for the care and support of the NICU, then and now. We thank God for our miracle baby.

13 For you created my inmost being;
you knit me together in my mother’s womb.
14 I praise you because I am fearfully and wonderfully made;
your works are wonderful,
I know that full well.
15 My frame was not hidden from you
when I was made in the secret place,
when I was woven together in the depths of the earth.
16 Your eyes saw my unformed body;
all the days ordained for me were written in your book
before one of them came to be.  (Psalm 139:13-16)